The Lifetime Achievement in the Field of Eating Disorders Award will be made to recognise an ANZAED member who is in the latter part of their career and who has made an exceptional contribution over an extended period of time, i.e., some-one who had had a substantial career in the field.

This Award may not necessarily be given every year.


A Distinguished Achievement Award in the Field of Eating Disorders is awarded to recognise a distinguished contribution of an ANZAED member in one or more of the following fields related to eating disorders: Research; Clinical Practice; Education/Administration; Advocacy.

This Award may not necessarily be given every year.

Please direct any enquiries to anzaed@anzaed.org.au OR
CONTACT US HERE

Nomination procedures:
Nominations must be made by any ANZAED member and emailed to the Secretary c/- anzaed@anzaed.org.au
Being a special award, self-nominations are not accepted and the Nominee should not be informed of their nomination.

In making a nomination, please provide the following information:

Adjudication
Eligibility, including ANZAED membership status, will be verified by ANZAED prior to the full review of nominations. All eligible nominations will be reviewed by a panel of no fewer than 3 reviewers.

Announcement
The award will be announced at the Annual General Meeting by the President. 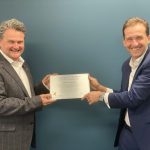 Mr Chris Thornton is a clinical psychologist who has specialised in the treatment of patients with eating disorders for nearly 25 years. Chris is the Clinical Director and Principal Clinical Psychologist of The Redleaf Practice. He provides supervision and case consultation to all receiving treatment at The Redleaf Practice. Chris has held positions at the major private eating disorders units in NSW, at The Northside Clinic, The Peter Beumont Centre for Eating Disorders at Wesley Hospital, and the Hills Private Hospital. He was actively involved in the design and implementation of Psychological Therapy in those hospital’s eating disorders service. He was responsible for the supervision of the Clinical Psychologists working on the program and for training Doctorate of Clinical Psychology Interns on their Eating Disorders rotation. 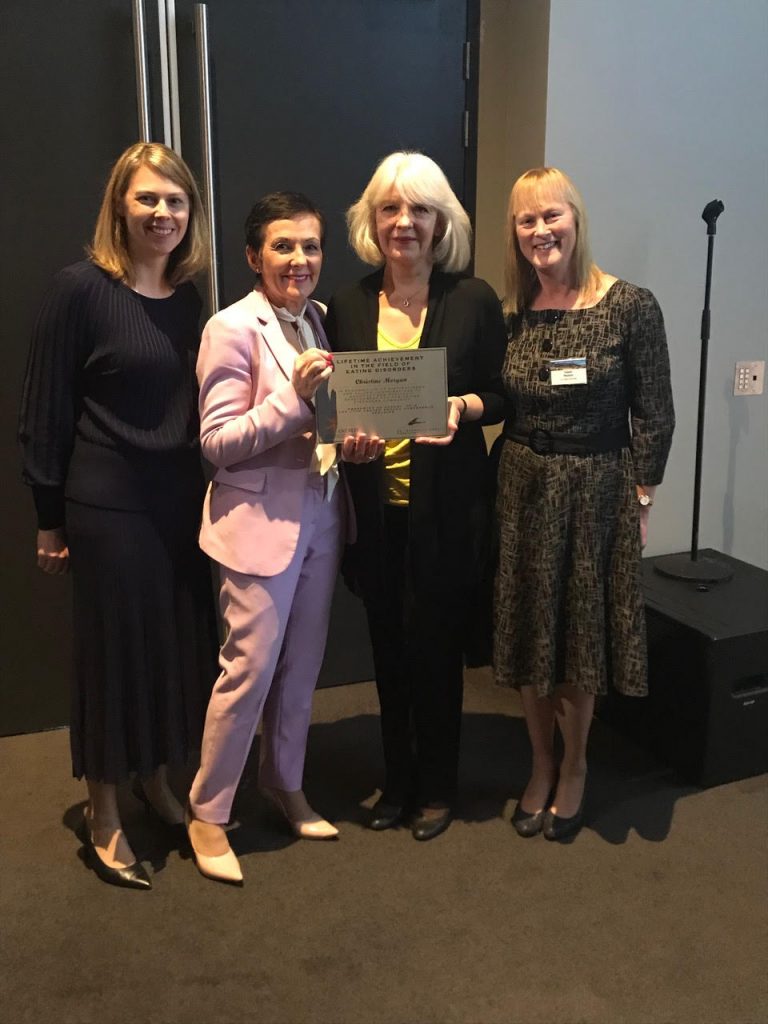 The ANZAED 2019 Lifetime Achievement Awards in the Field of Eating Disorders will be presented to Christine Morgan & Claire Diffey.

Christine worked for 25 years working in company law and was Company Secretary / General Counsel for a number of public listed companies, and Executive General Manager Business Strategy for Telstra, before moving to the not-for-profit sector. She moved to the position of General Manager at Wesley Mission over portfolios including community services, health, corporate services and fundraising and then became CEO of Eating Disorders Foundation of NSW. In 2009, Christine was appointed CEO of the Butterfly Foundation and joined the Board of Directors in 2013, positions she held until 2019. During this time, Christine also held the position of National Director of the National Eating Disorders Collaboration.

Claire commenced her career in mental health as a mental health nurse in public mental health. She was instrumental in introducing a family centred approach to child and youth mental health, implementing reflective practice and single session work with families. Claire commenced at CEED in 2007 and become its Manager in 2008 and has continued in that role until her recent retirement in June 2019. In her role as Manager, Claire ensured ongoing project funding to implement novel treatments like multi-family therapy for adolescent anorexia nervosa and Collaborative Carer Skills Workshops; the engagement and roll-out of evidence based treatment training for headspace centres and has been an innovator and advocate for integrating carer lived experience workforce at all levels of the eating disorders system of care. 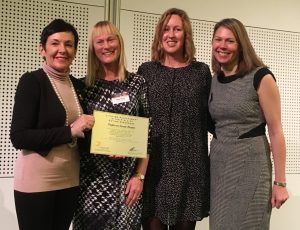 The ANZAED 2018 Lifetime Achievement Award in the Field of Eating Disorders was presented to Susan Paxton. Susan Paxton is Professor Emeritus in the School of Psychology and Public Health at La Trobe University. In her distinguished career as a clinical psychologist and academic, Susan has made an exceptional contribution to theoretical and applied eating disorders research, spanning from prevention to intervention, using self-help and group therapy approaches, and has investigated theoretical models of risk and development of bulimia nervosa, anorexia nervosa, disordered eating, and body dissatisfaction across the lifespan. Susan has published 186 papers in peer review and received the Academy for Eating Disorders Leadership Award for Research in 2013. She has also supported the development of the next generation of researchers in the field, having supervised 39 PhD/ Psychology Doctorate students. Susan is highly regarded as an expert in body image and eating disorders, having participated in state and federal advisory committees, steering committees such as the National Eating Disorder Collaboration (2011-2018), and as Chair of expert advisory panels. Susan has also contributed as President (2004-2007) and Secretary (2013-2017) of ANZAED and President of the Academy for Eating Disorders (2009-2010). 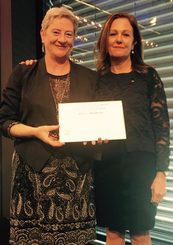 This award was presented to Claire Middleton  by President Beth Shelton on Saturday 2nd September in recognition of her tremendous work tirelessly and passionately carried out over many decades. She has been an advocatey in the field, and has established and nurtured the Butterfly Foundation, now a national advocacy organisation also involved in the delivery of a range of services. Claire is an innovator whose initiatives have changed the eating disorder field in Australia very much for the better, and continue to do so. Many people lives have been enhanced by her work – people with lived experience as consumers and carers, along with clinicians and researchers.

The 2016 awards was presented to Anthea Fursland by President Beth Shelton, in recognition of Anthea’s tireless and passionate works in the field of eating disorders carried out over her significant career. Anthea was President of ANZAED between 2011 and 2013.  She has chaired two annual conferences (in 2008 and 2014), and has contributed significantly to the field, primarily as a clinician, but also as a researcher, educator and supervisor. She has been the chair of an international Conference on Eating Disorders in 2015, and is a leader and landmark of the eating disorder adult field in her home state of Western Australia.

The 2015 Lifetime Achievement Award was won by Professor Phillipa Hay and was introduced by Stephen Touyz and awarded by Sloane Madden.

Professor Hay is one of the founding members of ANZAED and has served for many years on the ANZAED Executive and for two years as ANZAED’s President. She has always been a great supporter of ANZAED in many different ways, however her contribution to the field of eating disorders goes far beyond her contribution to ANZAED. She has made an enormous research contribution and she has further built the reputation of Australians working in the eating disorder field with the establishment of the Journal of eating Disorders along with Stephen Touyz. Not only does she have a great vision for her field, but she also has the energy and common sense to make important things happen.

The inaugural award winner was Professor Stephen Touyz who was awarded a Lifetime Achievement award on 22 August 2014 at the 12th annual ANZAED conference in Freemantle. The award was presented by President Sloane Madden and Past President Chris Thornton in recognition of distinguished and valued contributions to ANZAED and the eating disorders community of clinicians, researchers and consumers. Stephen was one of the founders of ANZAED in 2005 and was our inaugural Treasurer. 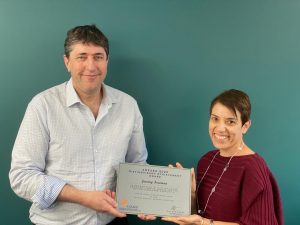 Dr Jeremy Freeman is the Development Director at ANZAED and assists ANZAED develop its range of member services as well as in advocating for the needs of clinicians, researchers and others to better understand and support people with Eating Disorders. Based in Sydney Australia, Jeremy has worked for several years as a clinical psychologist. He has qualifications and experience in health management and administration, and has worked for the NSW Health Department, the Centre for Eating & Dieting Disorders (CEDD), the National Eating Disorder Collaboration (NEDC). 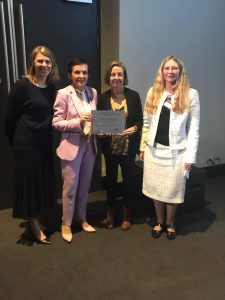 Tracey has worked as a clinician in the area of eating disorders for almost 30 years and her current research interests are in the aetiology, prevention and treatment of eating disorders. She was awarded the Australian Psychological Society (APS) Early Career Award on 2003, in 2015 she was elected a Fellow of the Academy of the Social Sciences in Australia, in 2016 she was made an Inaugural Honorary Fellow of the Australian Association for Cognitive and Behaviour Therapy, in 2017-18 she was the president of the Eating Disorder Research Society, and in 2018 she was appointed to the Expert Advisory Panel, Million Minds, a Federal mental health research mission. She is currently an Associate Editor for the International Journal of Eating Disorders. More recently she has developed a body of research in the area of perfectionism, co-authoring 2 books on the treatment of perfectionism. She has over 190 publications in peer reviewed journals. 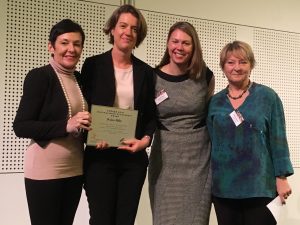 The winner of the ANZAED 2018 Distinguished Achievement Award in the Field of Eating Disorders was Dr. Lisa Miller. Dr Miller has made significant contributions to changes in the treatment landscape in Western Australia. For over ten years Dr Miller has been the leading advocate for improved services for those with eating disorders. Lisa was a pioneer, providing specialist input to people who were admitted into medical wards. She developed a devoted team who learned how to provide compassionate, best-practice informed treatment. As a result of her leadership and constant pressure on senior administrators, a business case was written and we received funding to create WAEDOCS, the Western Australia Eating Disorder Outreach and Consultation Service. Lisa’s passion for her work is contagious, and her dedication to advocating for patients and providing best practice care for all is exemplary and is a leader in the field in that state, having advocated for treatment services at a level of contribution well above what would be expected in her role. 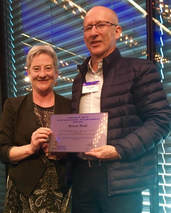 This award was presented to Warren Ward by President Beth Shelton on Saturday 2nd September in recognition of the major contributions he has made to clinical treatment research and governance in field of Eating Disorders. Warren has worked tirelessly and successfully in the field of eating disorders and has established the Eating Disorders Outreach Service (EDOS) – now Queensland Eating Disorder Services (QuEDS), a  comprehensive service incorporating inpatient beds, a day program and outpatient program and a statewide outreach and upskilling mechanism throughout Queensland for people treating eating disorders. Warren has been a dynamic and thoughtful member of the ANZAED Executive, a past Secretary and initiator of the ANZAED Social Media Committee program.

The 2016 awards was presented to Anthea Fursland by President Beth Shelton, in recognition of Anthea’s tireless and passionate works in the field of eating disorders carried out over her significant career.

Loraine and Kate established EDASA together in 2012 in order to bring South Australia in line with every other state in Australia by providing a stand-alone service providing support, information and advocacy to people experiencing an eating disorder and their friends and family. As an unfunded organisation with an uncertain future, Loraine and Kate have continued to defy the odds with unwavering determination and passion towards fulfilling EDASA’s vision to reduce the incidence, severity and associated stigma of eating disorders in our community.